(SEOUL) October 9, 2014 – Since declaring design management as a core driver of the company’s future growth and the hiring of President & Chief Design Officer Peter Schreyer in 2007, Kia Motors Corporation’s brand value has skyrocketed by 480% from US$929 million to US$5.4 billion, according to Interbrand’s exclusive list of 100 ‘Best Global Brands 2014’ which was released today. This rise in brand value far outpaces the average growth rate over the same period of all 11 other automakers on this year’s list.

Kia first entered Interbrand’s annual 100 ‘Best Global Brands’ rankings in 2012, coming in 87th place with brand value of US$4.1 billion, and subsequently rose four spots to 83rd position in the 2013 study following a 15% increase in brand value to US$4.7 billion. During the past year, Kia’s brand value increased by a further 15% to US$5.4 billion, elevating the Korean automaker nine places to 74th position. Kia’s increase in brand value according to this year’s study is more than double that of the top 100 companies’ average brand value growth rate of 7%.

The significant increase in Kia’s brand value over the past year can be attributed to factors such as the continued roll-out of high profile marketing activities including this year’s sponsorship of the 2014 FIFA World Cup Brazil™ and Australian Open tennis championship, an ongoing new product offensive featuring the launch of twelve next generation or significantly upgraded models in 2013 and 2014, and a 4% rise in average selling price of exported vehicles during the first half of 2014 compared to the same period of the previous year.

Moreover, Kia’s global brand campaign based on its new brand identity introduced in 2012 – A Different Beat – has provided the company with great internal clarity and strong core brand attributes of “Vibrant, Distinctive and Reliable.” As a part of its efforts to strengthen the brand’s ‘A Different Beat’ image and global customers’ emotional attachment to the brand, Kia has been executing various innovative marketing activities since 2012 including sensory marketing initiatives such as the ‘Red Cube’ visual identity for dealerships around the world as well as introduction of a brand signature sound that is being applied to Kia’s television commercial end frame jingle and other customer touch points.

Hyoung-Keun (Hank) Lee, Vice Chairman of Kia Motors Corp., said, “We at Kia are committed to creating unsurpassed levels of customer value in the automotive industry, and our rise up Interbrand’s ‘Best Global Brands’ rankings this year is a testament to the dedication of all Kia employees worldwide to exceeding customer expectations in every area of the business.”

According to Interbrand, “As a result of its continued branding efforts, expressed in the slogan, ‘The Power to Surprise,’ the Korean automobile manufacturer successfully repositioned itself from an image of low cost and low quality and is now targeting more design conscious consumers who value an emotional connection to their brand.”

This latest recognition by Interbrand follows Kia’s rise from 37th to 35th place on Interbrand’s list of 50 ‘Best Global Green Brands 2014’ released this past June.

The 2014 edition of Interbrand’s annual 100 ‘Best Global Brands’ study was executed through a comprehensive brand performance analysis using best practice research methodology by expert analysts. The study measures a corporation’s financial performance in terms of the raw financial return to investors; role that a brand plays in the actual purchase decision; and brand strength, which is the ability of a brand to secure the delivery of expected future earnings.

About Kia Motors Corporation
Kia Motors Corporation (www.kia.com) – a maker of quality vehicles for the young-at-heart – was founded in 1944 and is Korea's oldest manufacturer of motor vehicles. Over 2.7 million Kia vehicles a year are produced in 10 manufacturing and assembly operations in five countries which are then sold and serviced through a network of distributors and dealers covering around 150 countries. Kia today has around 48,000 employees worldwide and annual revenues of over US$43 billion. It is the major sponsor of the Australian Open and an official automotive partner of FIFA – the governing body of the FIFA World Cup™. Kia Motors Corporation's brand slogan – "The Power to Surprise" – represents the company's global commitment to surprise the world by providing exciting and inspiring experiences that go beyond expectations. 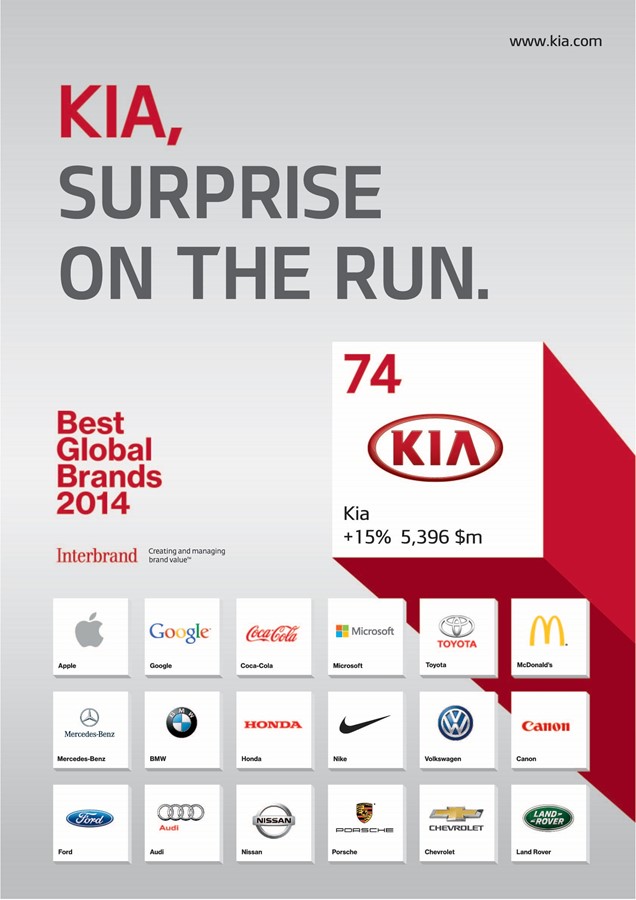