All-New Sorento SUV Transported the Iconic “2021” Numerals from California to Times Square  for the Ball Drop, Will Shuttle Frontline Workers to Times Square to Ring in the New Year

IRVINE, Calif., December 29, 2020 –Kia Motors America, the Official Sponsor of the New Year’s Eve Countdown, will ring in the arrival of 2021 with a groundbreaking effort for the all-new Sorento SUV. The campaign began in early-December with a Sorento embarking on a coast-to-coast tour of the U.S. on a mission to deliver the iconic “2021” New Year’s Eve numerals to One Times Square in time for the Ball Drop. Joining Kia on the cross-country trip were photographers from National Geographic that documented the coast-to-coast journey and captured inspirational stories at select points along the way.

On New Year’s Eve, a new creative campaign featuring the most rugged and refined Sorento to-date will air on Dick Clark’s New Year’s Rockin’ Eve with Ryan Seacrest 2021 on ABC. Created by David & Goliath, Kia’s creative agency of record, the campaign includes a 30-second spot entitled, “The World’s First Storytelling Machine.” The spot shows that the all-new 2021 Sorento is much more than an SUV, it is a powerful, highly sophisticated tool – a Storytelling Machine – to help us all discover stories worth telling, especially at a time when experiences are limited. In addition to the broadcast campaign, the Sorento will be featured on New Tradition’s spectacular digital billboards on the north façade of One Times Square, the building that launched the annual New Year’s Eve Ball Drop tradition in 1907. Sorento’s digital billboards will be on display through January.

“Like everyone, we are ready to say goodbye to 2020 and hello to the new opportunities that 2021 will bring, including the arrival of all-new Sorento, the most advanced SUV Kia has ever built,” said Russell Wager, director, marketing operations, Kia Motors America. “New Year’s Eve marks a fresh start and a new beginning. It’s another chance for us to write our own story. The Kia Sorento, with its rugged capability and comfortable and flexible interior is perfectly equipped to take you anywhere your story leads.”

To recognize and thank them for their hard work and dedication, Kia will host frontline workers and their families so they can safely experience the thrill of New Year’s in Times Square for themselves. The families will be shuttled to and from Times Square for this once-in-a-lifetime opportunity in a fleet of 2021 Kia Sorento and Telluride SUVs.

Kia’s New Year’s Eve campaign started on December 1 with an all-new Sorento SUV and “2021” Times Square Numerals in tow, embarking from Kia’s Irvine, California, headquarters on a cross-country road trip to deliver the numerals to One Times Square. Along the way, the Sorento stopped at Kia dealerships in Nevada, Arizona, Texas, Louisiana, Mississippi, Alabama, Florida, Georgia, North Carolina, Virginia, Maryland, Pennsylvania, New Jersey and New York. At select points along the route, National Geographic documented the Sorento’s journey to help bring the stories from these locations to life through photography and video.

Throughout the road trip and on New Year’s Eve in Times Square, Kia has and will adhere to CDC recommended protocols regarding face masks and social distancing guidelines. Times Square New Year’s Eve on December 31, 2021 is a broadcast event and is not open to the public. 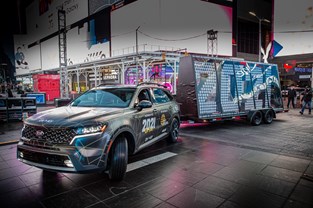 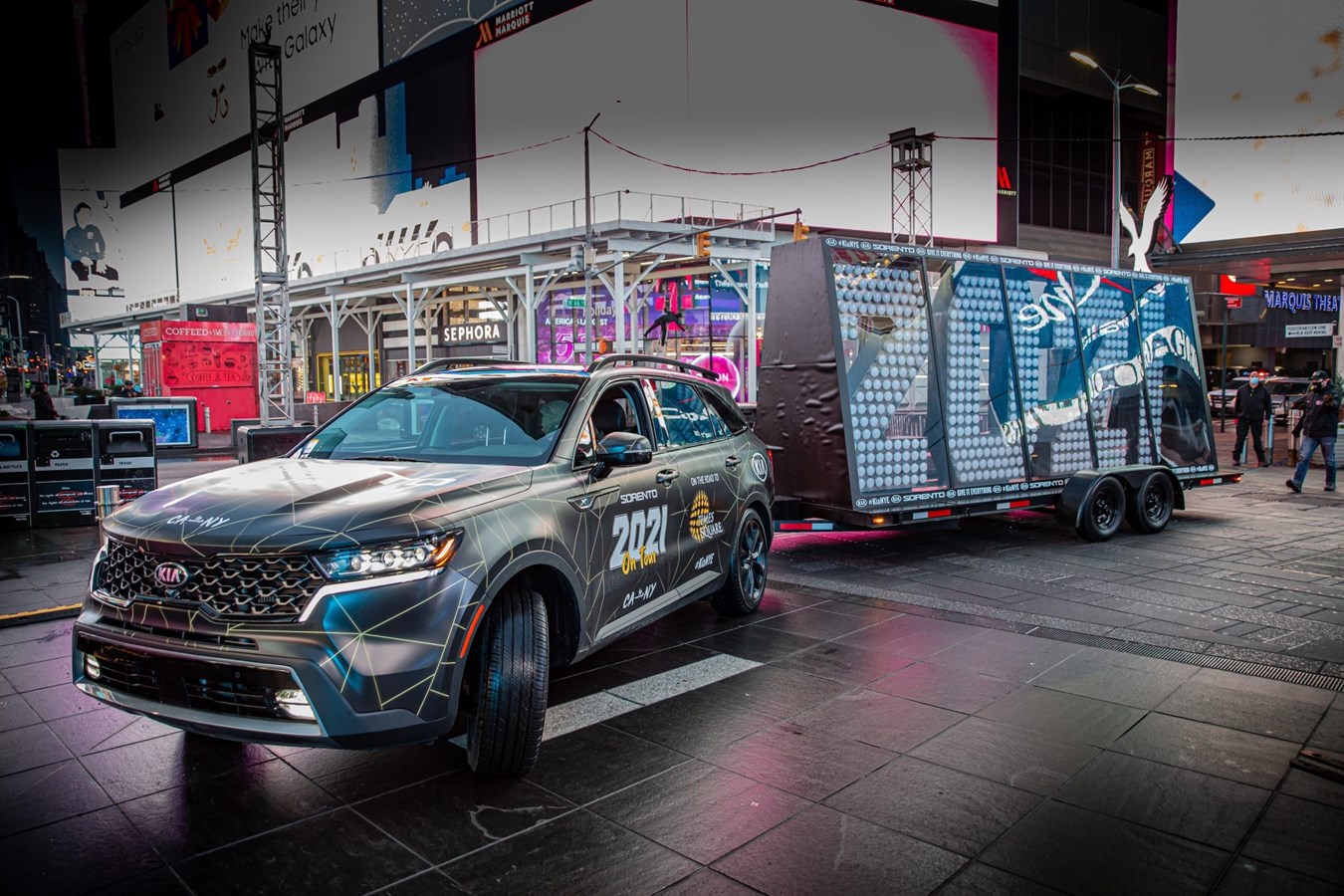