IRVINE, Calif., July 1, 2020 – Kia Motors America’s June sales total of 47,870 vehicles featured retail-only sales within one percent of the June 2019 mark despite a shortage of the award-winning Telluride SUV and other select models. In the month that saw Kia rank number one in the industry in J.D. Power’s Initial Quality Study, the Sorento SUV led the way while the Sportage SUV delivered its best-ever retail performance in June.

“Despite the pandemic, demand for Kia’s world-class offerings such as the Telluride remains extraordinarily high. In fact, on a selling day adjusted basis, Kia’s retail sales were up nearly 6-percent year-over-year,” said Bill Peffer, vice president, sales operations, Kia Motors America. “Kia has once again topped the industry in initial quality and we are ready to begin the next chapter of our product story with the arrival of the all-new 2021 K5, which has been very well received by the media thus far, and consumers are already reaching out for details on future availability.”

Headquartered in Irvine, California, Kia Motors America has been the highest ranked mass market brand in initial quality for five consecutive years according to J.D. Power** and is recognized as one of the 100 Best Global Brands by Interbrand.  Kia serves as the "Official Automotive Partner" of the NBA and offers a complete range of vehicles sold through a network of nearly 800 dealers in the U.S., including cars and SUVs proudly assembled in West Point, Georgia.* 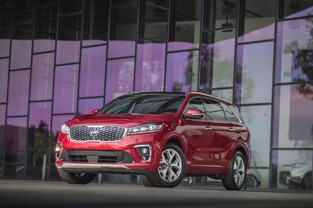